Loading...
We know your business is rapidly adapting to the global COVID-19 outbreak. If you need assistance with your Wolters Kluwer products or would like to get more information on a complimentary Guest Pass to any of our online products, please contact your representative. To help you stay informed and navigate the changes, Wolters Kluwer is providing free insights and resources. View Resources here >> Close
Store Legal / International / NEW RELEASES International Arbitration in Italy
Coming Soon 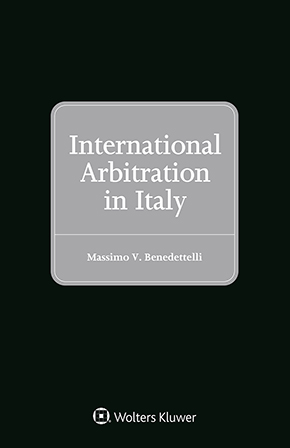 International Arbitration in Italy is the first commentary on international arbitration in Italy ever written in English. Since centuries, arbitrating cross-border business disputes has been common practice in Italy, which makes the Italian arbitration law and jurisprudence expansive and sophisticated. Italian courts have already rendered thousands of judgments addressing complex problems hidden in the regulation of arbitration. Italian jurists have been among the outstanding members of the international arbitration community, starting from when, back in 1958, Professor Eugenio Minoli was among the promoters of the New York Convention. Italy being the third-largest economy in the European Union and the eighth-largest economy by nominal GDP in the world, it also comes as no surprise that Italian companies, and foreign companies with respect to the business they do in the Italian market, are among the leading ‘users’ of international arbitration, nor that Italy is part to a network of more than 80 treaties aimed to protect inbound and outbound foreign direct investments and being the ground for investment arbitration cases. Moreover, in recent years, Italy has risen to prominence as a neutral arbitral seat, in particular for the settlement of ‘intra-Mediterranean’ disputes, also thanks to the reputation acquired by the Milan Chamber of Arbitration which has become one of the main European arbitral institutions.

What’s in this book:
Dealing also with the ‘theory’ of international arbitration, this pioneering book elucidates original solutions offered by Italian arbitration law to various complex issues, such as:

How this will help you:
This spearhead book will prove to be an indispensable tool for arbitrators, counsel, experts, officers of arbitral institutions and judges who happen to be involved in arbitral proceedings or arbitration-related court proceedings somewhat linked to the Italian legal system, either because Italy is the seat of the arbitration, the Italian jurisdiction has been ousted by a foreign-seated arbitration, the assistance of Italian courts is sought for the granting of interim measures or the enforcement of a foreign award or the arbitration results from a multilateral or bilateral investment protection treaty to which Italy is a party. This book may also be of general interest for scholars and practitioners of international arbitration at large in light of the solutions it proposes on various general issues of international arbitration law.

Note to the Readers

CHAPTER 7
The Law Applicable to the Merits

CHAPTER 8
Costs of the Arbitration

APPENDIX I
Main Provisions of Italian Law on Arbitration