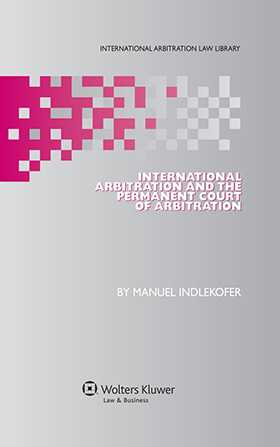 Qty.
This product is available for the standing order program. Learn More
Add to Cart
For general delivery times, please see our Shipping Policy
Share
Overview
The modern tendency to restrict international arbitration to matters of commerce and investment is succumbing to a renewed recognition of the original impetus for dispute resolution by arbitration – i.e., matters of public international law, most importantly the settlement of disputes that pose a threat of international conflict. Recent developments suggest a renaissance of public international arbitration, most clearly manifested in the present flourishing of the Permanent Court of Arbitration (PCA), the oldest existing dispute settlement institution in international law.

As the calls for the development of new and more appropriate methods for dispute settlement in international law increased during the 1990s, the PCA undertook a structural reform and is today a vital forum for dispute settlement, with scores of arbitrations currently pending under its auspices. This book – the most comprehensive study of the institution to date, covering its history, its present status, and its future prospects – proves the PCA’s contemporary relevance within the international dispute settlement framework. Among aspects of the PCA’s work covered are the following:

A very useful Practitioner’s Guide provides an overview of the PCA’s various services and the best means of accessing them, along with a summary of the key provisions of the new PCA Arbitration Rules 2012. For lawyers who are involved in dispute resolution proceedings, there can be little doubt about the PCA’s relevance. This book is at once an academic work, indispensable for scholars of the institution, and a practical guide that will be a required addition to the libraries of counsel, arbitrators, and others involved in dispute resolution proceedings conducted at the PCA.
Table of Contents

Chapter 1 Roots of Public International Arbitration and the Permanent Court of Arbitration.

Chapter 3 Today’s Activities of the Permanent Court of Arbitration.

Chapter 4 Prospects for International Arbitration and the PCA in the Twenty-First Century.