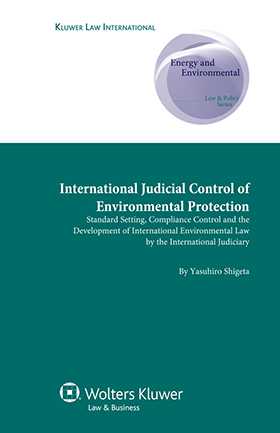 It is widely understood today that nothing is more urgently needed that international agreement on the scale, application and enforcement of environmental law. This outstanding book – a major contribution to the debate – demonstrates that existing international judicial bodies have already taken giant steps toward overcoming the insufficiency of international law enforcement with standards, compliance mechanisms, and new law development in the field of environmental law. The author not only presents a detailed analysis of a wealth of relevant case law, but also outlines a model suggesting that a commitment to international judicial control can be used to contain deviance within acceptable limits, ensure harmonized interaction among regimes, and clarify the meaning and application of environmental norms.

With pervasive attention to the differing demands of inter-State relations and State-individual relations, and of the varieties of “soft” and “hard” control, the book considers the ways in which the proposed judicial control could move powerfully toward minimizing damage in such legal environmental areas as the following:

• Obligation not to cause transfrontier pollution harm;

It is no exaggeration to say that the environment has taken centre stage in international affairs, and this book’s provocative proposal cuts through the much-lamented ineffectiveness of international law where it matters most. In its clear-headed recommendations of practical ways to resolve ambiguities, confront recurrent non-compliance, and cure the absence and defects of applicable rules, it will be of immeasurable value to policymakers, practitioners and academics concerned with international environmental law.
Table of Contents

Chapter 6. Synthesis of the Analysis.