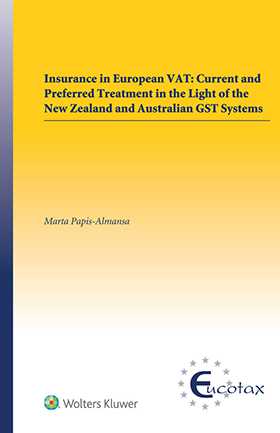 Insurance in European VAT. Current and Preferred Treatment in the Light of the New Zealand and Australian GST System provides a thorough legal analysis of the treatment of insurance in the harmonized system of European VAT as compared to the treatment of insurance in the New Zealand and Australian Goods and Services Tax (GST) systems. Insurance constitutes a significant part of the financial services sector, and it is one of the foundations of a modern society and economy. In the design of tax laws, however, whether and how to tax insurance is a complex issue that has become particularly controversial in the area of VAT. In the EU, as in most of the world, insurance is exempt from VAT, but New Zealand and Australia do not follow this practice. Given that New Zealand’s simple, comprehensive GST – called ‘the world’s purest value-added tax’ (and its modified Australian version) – do not appear to suffer from the shortcomings in efficiency and effectiveness that plague European VAT, a comparison of the two systems is in order. This book is thus the first to draw a comparative in-depth study of the treatment of insurance in the two systems.

Among the underlying issues and topics treated by the two systems covered are the following:

The analysis is grounded in a methodology in which concepts of European VAT are compared with concepts performing the same function in the Australian and New Zealand GST laws. The author concludes with proposals for reform in EU VAT in the light of experience in these two major non-EU countries.

This book is the first comprehensive legal research devoted to the treatment of insurance in EU VAT published in English. The assessment of the EU VAT reform helps taxation authorities find practical ways to apply the rules of the VAT Directive to insurance transactions. Given that it has been proven that exemptions from VAT, such as insurance, cause a significant number of economic distortions and inefficiencies, this study represents a major contribution to a topical debate in European VAT law for policymakers, practitioners, and scholars not only in Europe but across the world as well.

CHAPTER 3 Insurance and the Scope of VAT

CHAPTER 4 The Concept of Insurance in VAT/GST

CHAPTER 5 The Supply of Insurance