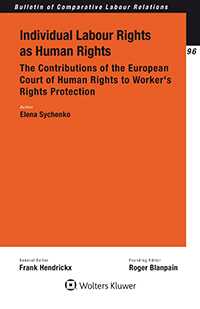 Individual Labour Rights as Human Rights: The Contributions of the European Court of Human Rights to Worker’s Rights Protection

Individual Labour Rights as Human Rights is the first book in English to provide a thorough analysis of the Court's most recent case law, cases considered in the period from 1963 to 2016, on fundamental employment rights such as the right to wages, protection from discrimination and unfair dismissal, the right to occupational safety at work, and civil liberties such as the freedom of association, the freedom of religion and expression, and the right to privacy. This book offers the most detailed and considered analysis available of how individual labour rights have been referred to in the human rights jurisprudence of the European Court of Human Rights (ECtHR).

What's in this book:

Drawing on close scrutiny of 347 cases since 1963, this book traces the evolutionary development of the Court's position on labour rights as human rights through case analyses, commentary, and general conclusions in each of several categorical groupings. Among the issues and topics raised are the following:

There has been a substantial debate over the interconnection between labour rights and human rights. Consequently, the jurisprudence of the ECtHR concerning substantive individual labour rights, or 'rights at work', is coming to greater prominence at the national level throughout the forty-seven Member States of the Council of Europe.

Given that the Court's position has already changed certain aspects of some national labour laws, this peerless volume proves indispensable for practitioners and scholars monitoring the growing applicability of human rights law in matters of labour and employment, especially in the areas of protection of wages, unjust dismissal, and occupational safety.

Chapter 1 History of the Convention: A Long Way to European Quasi-Constitutional Court

Chapter 2 Integration of Labour Rights into the ECHR

Chapter 3 The Prohibition of Slavery, Servitude, Forced or Compulsory Labour

Part III Rights of Employees Under the ECHR and Unfair Dismissal

Chapter 7 The Employee’s Freedom of Expression and Association

Chapter 8 The Protection of Wages: Current Cases and Perspectives

Chapter 9 Occupational Safety in the Jurisprudence of the ECtHR: Current Cases and Perspectives