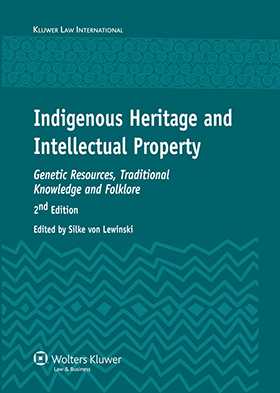 Recognizing that the commercial exploitation of indigenous knowledge and resources takes place in the midst of a genuine and significant clash of cultures, the eight contributors to this important book explore ways in which intellectual property law can expand to accommodate the interests of indigenous people to their traditional knowledge, genetic resources, indigenous names and designations, and folklore. In so doing they touch upon such fundamental issues and concepts as the following:

As a starting point toward mutual understanding and a common basis for communication between Western-style industries and indigenous communities, Indigenous Heritage and Intellectual Property is of immeasurable value. It offers not only an in-depth evaluation of the current legal situation under national, regional and international law including analyses of the Convention on Biological Diversity and other international instruments, as well as initiatives of the World Intellectual Property Organization (WIPO), the UN Food and Agriculture Organization (FAO), and other international bodies but also probes numerous further possibilities. While no one concerned with indigenous culture or environmental issues can afford to ignore it, this book is also of special significance to practitioners and policymakers in intellectual property law in relation to indigenous heritage.

This book, here in its second edition, presents the most recent state of knowledge in the field.