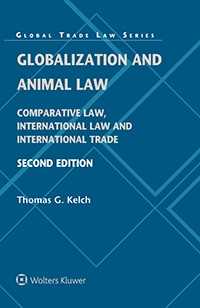 Globalization and Animal Law provides a detailed analysis of international and comparative animal law focusing on the impact of the globalized economy on animal law. The rise of the globalized economy has rendered an even more profound change in the relationship between humans and other animals than the ancient progression from hunter-gatherer to agricultural society. In today’s global markets, multinational corporations exploit the economic value of animals on an unprecedented scale.

The philosophical and legal notions that animals are mere unfeeling machines or pieces of property, although more or less taken for granted for centuries, have been challenged, if not burst asunder, in recent decades (in law, moral philosophy and cognitive and other sciences), and regulation of the treatment of animals in agriculture, experimentation, entertainment and other areas has begun to make substantial inroads in national and international law. In light of this growing awareness, the author in this book lucidly explicates the sorts of legal rules that affect the global animal marketplace by describing a wide range of domestic and international laws relating to the treatment of animals.

Among the issues covered are the following:

Representative norms in existing animal protection laws are analyzed and critiqued, illustrating the diverse approaches taken by different countries and jurisdictions, including Australia, Austria, Brazil, Canada, the EU, Germany, India, Ireland, New Zealand, Switzerland, the UK, and state and federal laws of the US. Numerous international treaties and conventions are also covered, including the Berne Convention for the Protection of Literary and Artistic Works, the CITES Convention, the European Convention for the Protection of Animals Kept for Farming Purposes, the European Patent Convention, the GATT Treaty, the TRIPS Agreement and the Universal Copyright Convention.

It is not difficult to grasp, given the continuing increases in production, consumption and use of animals and animal products worldwide, that legal initiatives in this often emotional and acrimonious area of law are frequently contentious and hard fought. But this is really just the dawn of animal law, which has only recently become recognized as an important cutting-edge topic. In light of these rapid developments, this book serves as a guidepost in contributing to the continuing development and understanding of this law, clearly laying out the contours and boundaries of existing animal laws in our global economy, and allowing legal educators, concerned lawyers and policymakers to teach, formulate proposals, argue cases and defenses, and secu

CHAPTER 2 Morality, Science, and the Law

CHAPTER 8 The WTO and GATT

CHAPTER 11 Past, Present, and Future