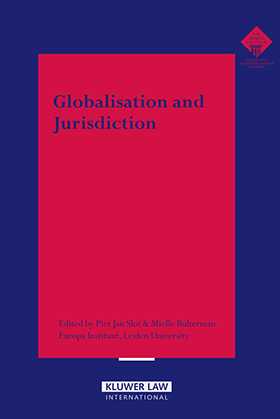 Qty.
Add to Cart
For general delivery times, please see our Shipping Policy
Share
Overview
Ever since international economic relations have been established law has been developed to shape them in a satisfactory manner. Conversely, changes in the law have sometimes preceded, and thus fostered, international economic intercourse. The spectacular growth of the international economy over the past decades has called for a more intensive role for the law, and probably also a different kind of law. This has led to a panoply of new legal instruments and procedures as well as a resuscitation of the traditional and established forms.

In December 2002, the Europa Instituut of Leiden University convened a seminar to discuss the various responses to the challenges posed by globalisation in different fields of economic activity and legal practice. The theme `Globalisation and Jurisdiction¿ was reflected upon both by scholars and practitioners. Their presentations are presented in this book in a more formal and extensive format. Some additional topics have been included to provide an even more extensive treatment of the theme.

In this book, the legal developments in some selected sectors which display particularly interesting features, such as international securities and banking and the internet are addressed. For every sector the question can be asked: what are the challenges posed by globalisation and how has the law been reacting to them? An overview of these developments provides valuable input for the second purpose of this book, the academic debate on jurisdiction and globalisation. Which problems are encountered? To what extent have traditional concepts of jurisdiction accommodated the requirements of a global economy? To what extent have these traditional concepts been adapted and new ones developed to solve these problems?