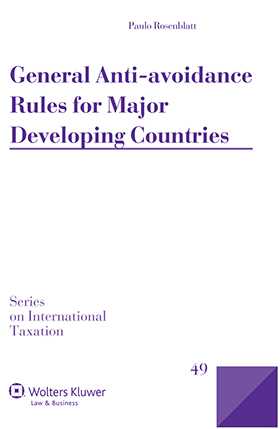 General Anti-avoidance Rules for Major Developing Countries is the first in-depth treatment of anti-avoidance issues in the three major developing nations of India, Brazil and South Africa. Taking a comprehensive and comparative approach, analysis of over 100 cases and 500 legal references are included, as well as examination of the statutory legislation and administrative guidelines.

Offering detailed guidance for emerging countries, you’ll gain practical understanding with a roadmap demonstrating the different routes developing countries can go through; the fastest routes, the paths that require caution and the directions to avoid. Examples are given from relatively successful GAARs in developed jurisdictions such as the United Kingdom, Australia, Canada, New Zealand, Hong Kong, France and Spain.

Improve your understanding of a subject that daily becomes more prominent as the major developing countries grow in economic power. With its clearly articulated safeguards and checks and balances and commitment to the rule of law, General Anti-avoidance Rules for Major Developing Countries is sure to play a significant role in the development of tax avoidance measures in the years to come.

General Anti-avoidance Rules for Major Developing Countries by Paulo Rosenblatt, is the essential guide for all involved in tax avoidance in developing countries.

CHAPTER 4 General Anti-avoidance Rules and Doctrines in the Courts.

CHAPTER 5 The Secondary Elements in Action.

CHAPTER 6 GAAR and the Protection of Taxpayers’ Rights.