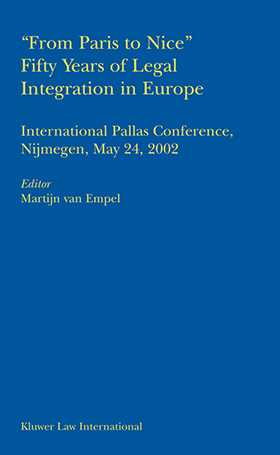 "From Paris to Nice" Fifty years of Legal Integration in Europe: International Pallas Conference, Nijmegen, May 24, 2002

Qty.
Add to Cart
For general delivery times, please see our Shipping Policy
Share
Overview
When we think of European law, we tend to focus on the complex interactions of EU institutions and national legal systems. In reality, European law is revealing itself to encompass an even wider scope than we had imagined. Over the last fifty years, an intricate web of principle and practice has been woven, almost invisibly, by such actors as multinational law firms, trade associations, corporations, and trade unions. This ¿horizontal¿ aspect has produced norms across Europe in important matters related to the environment, financial services, corporate law, and many other areas in which legal concerns are paramount.

In the brilliantly conceived conference from which this book derives, outstanding European legal authorities were brought together to see if they could capture the multi-layered nature of the European project as it has actually developed, and in the process discover a framework that might further Europe¿s continuing commitment to market integration, to the task of harmonizing laws while giving due place to Member State autonomy, and to the growth of participatory democracy.

The disparate and shifting set of considerations that make up this rich view of Community law manifests the emphasis that Pallas Consortium imparts to its teaching and to the research its has spawned. The Consortium¿consisting of the Universities of Barcelona (Spain), Bologna (Italy), Essex (Great Britain), LUISS Guido Carli (Italy), Jean Moulin Lyon 3 (France), Konstanz (Germany), Münster (Germany), and Nijmegen (the Netherlands)¿draws teachers, many of whom are also practitioners, from most of the Member States of the Union. In the work represented here, nine authors examine the current disposition of several broad economic, business, cultural, and social issues, elucidating how some have been brought into a constructive balance while others continue to cut across the divide between the Community¿s priorities and the evolving policies of Member States. In these latter cases, there is some probing for principles that might help guide the choices that must inevitably be made.

Anyone interested in the wider European legal entity, or indeed in the status and future of European integration, cannot fail to be engaged by this remarkable book. Its many insights will enrich the work of academics, lawyers, officials, and policymakers throughout Europe.