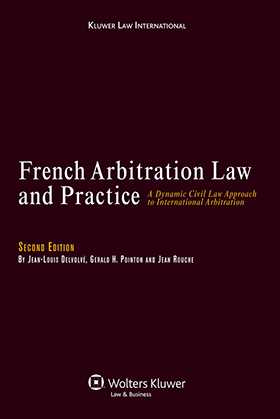 Increasingly, and to a greater degree than most national jurisdictions, France encourages and favours private arbitration as the normal and usual method for the resolution of disputes arising from international economic relations. In this new edition of the standard English-language work on French arbitration law and practice, the authors examine this trend as rules and practices developed in international arbitration have taken hold in French domestic arbitration and vice versa. Accordingly, the authors present the French arbitral process as one entire system of dispute resolution, which consists of various stages from the formation of the arbitration agreement to enforcement of the award, without dividing the subject into the formally distinct parts of domestic and international arbitration.

The new edition highlights such features of this dynamic body of arbitration law as the following:

At each stage the authors emphasize variations arising in international arbitration. The presentation also takes account, with comments at relevant points, of the influential 2006 Draft Reform of the Comité Français de l’Arbitrage. A highly useful annex reprints relevant French legislation with English translation, as well as the texts of major international arbitration conventions and an extensive bibliography.

The objective of the book is to present a modern and efficient arbitration system, not only to readers who are encountering it for the first time, but also to those who, although well-versed in it, might benefit from a text in English, with the comparisons to common law provisions such an undertaking entails. Any practitioner or academic interested in the field of international arbitration and the enforcement of foreign awards will welcome this very useful and informative work.