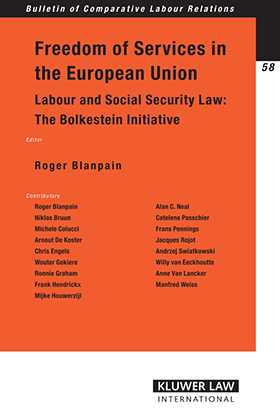 Freedom of Services in the European Union: Labour and Social Security Law

Qty.
This product is available for the standing order program. Learn More
Add to Cart
* For general delivery times, please see our Shipping Policy
Share
Overview
In June 2005, on the heels of the resounding no given by France and the Netherlands to a proposed European constitution, a panel of seventeen distinguished experts including not only academics but also officials of the European Commission, the European Parliament, the European Court of Justice, the European Trade Union Confederation, and the European Committee of Social Rights of the Council of Europe met to reopen discussion of freedom of services in the context of the new social Europe that is clearly now called for.

The panel members discussed many crucial issues, including the following:

As the definitive text representing this groundbreaking forum (European Forum organised by the Society for International and Social Cooperation, Brussels, 16-17 June 2005), this book offers students, lawyers, policymakers, and other professionals a richly detailed survey of where the European project now stands. It pushes us to look anew at at the balance between fair market competition on the one hand and adequate social protection of workers on the other.

The book also reprints the text of Directive 96/71/EC, along with a Commission Communication on its implementation, as well as a Euro-CIETT position paper and a Commission Proposal of 13 January 2004 for a new directive on the internal market.