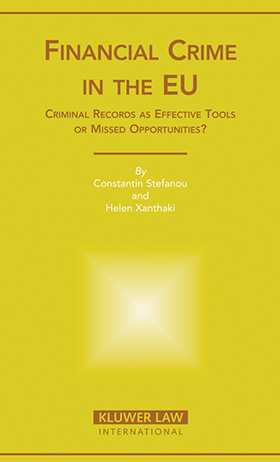 Financial Crime In the EU

There is little doubt that a series of EU Directives on money laundering and on public procurement have not reduced the incidence of financial crime in public contracts, in banking transactions, or in dealings among the ¿vulnerable¿ professions (mainly accountants, lawyers, and notaries). It is the convincingly argued thesis of this book that this failure stems directly from the dependence of these EU Directives on national laws criminal records. Harmonisation of these laws, the book demonstrates, is not only necessary but urgent.

In eighteen incisive essays, leading European authorities in the field provide in-depth discussion of such elements of the subject as methodologies for collecting criminal records, the authorities maintaining such records, the contents of such records and who has access to them, and conflicts with human rights and privacy legislation. The authors show that these factors and other vary enormously from country to country. They recommend EU initiatives that clearly mandate such specifications as the following: