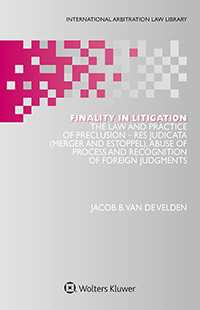 Finality in Litigation:The Law and Practice of Preclusion – Res Judicata (Merger And Estoppel), Abuse of Process and Recognition of Foreign Judgments provides guidance on finality in domestic and international litigation. Ensuring finality in litigation (‘preclusion’) is a challenge. Res judicata and abuse of process are technical doctrines. The same doctrines can also be effective tools to avoid duplicative or vexing litigation. This practitioner’s guide describes how preclusion works in English law. Without compromising on the breadth and depth of the analysis, it offers the same treatise of Dutch law, while highlighting critical differences and similarities between these common and civil law systems. Further, it clarifies how preclusion works between these and other jurisdictions. Finally, it suggests improvements to the process of preclusion between jurisdictions.

This timely treatise addresses the entire spectrum of preclusion issues arising in an English court:

In a manner easily accessible to foreign lawyers, this book offers the same treatise of Dutch law on the topic, addressing all preclusion issues that crop up in a Dutch court. A wider European context is also considered – how domestic judgments fare abroad, how preclusion operates in the Brussels and Lugano regime, levels of preclusion set by European due process, and more.

How this book will help you:

This book assists practitioners in avoiding duplicative or vexing proceedings. It further enables practitioners to make a better determination of how a case will affect one’s ability to pursue the same or related claims and issues in another case against the same, related or even third parties, both domestically and abroad. Additionally, this book contributes to conflicts theory on the problem of preclusion by foreign judgments.

‘A first class work which will be of considerable interest to practitioners and scholars.’

Lord Collins of Mapesbury, former Justice of the UK Supreme Court and General Editor of Dicey and Morris on Conflict of Laws

Part III. Harmonisation, Choice of Law, and a Suggested Approach

Chapter 5. The Harmonisation of Preclusion Law