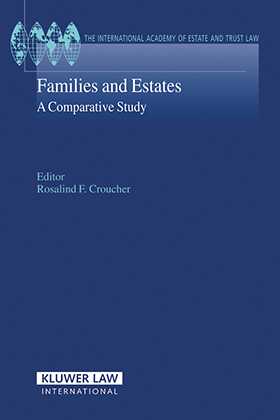 Families and Estates: A Comparative Study

This volume continues the work of the International Academy of Estate and Trust Law in 2003 and 2004 in examining through the juxtaposition of civil and common law jurisdictions areas of fundamental importance to estate and trust lawyers internationally. Here we focus upon two themes: the definition of `family and the impact of the expansion of the concept of `family in law; and family fights over wills and estates - what recourse family members may have in challenging an estate.

Each theme also has contained within it the continuing struggle between `private and `public: what responsibilities should be shouldered privately, within `the family, and what responsibilities are properly those to be borne by the state? The definition of family lies at the heart of this struggle - because with each expansion of the definition comes an expansion of responsibility in the private arena; but, at the same time, a public recognition of relationships having consequences - expanding definitions of family are necessarily normative in this sense.

The first Part, `The Challenge of the New Family for Law, considers the `challenge both in the inter vivos and the postmortem contexts in the United States, Canada, France, the United Kingdom, Australia and New Zealand. A particular focus is upon the dramatic expansion of the definition of family from the `traditional nuclear family consisting of a husband, wife and their mutual children to a definition that includes unmarried heterosexual and same sex couples living together and, in some jurisdictions to new kinds of companionate partnerships that are not based on a sexual relationship. In some jurisdictions such developments are simply an expression of sharing responsibility by allocating it in the private domain, as opposed to the public potentially through social welfare; in others, particularly in the United States, it is a flashpoint a defence of fundamental institutions and, with it, a defence of society itself.

The second Part, Family Fights over Wills and Estates, examines the law in Australia, Switzerland, France, Mexico, and the United Kingdom. In its comparison of civil and common law approaches we see how the law expresses the same principle objects - protection of family and obligations towards key family members - but does so from entirely different perspectives; and where the common law which enshrined the notion of testamentary freedom is being qualified through the expanding domain of family provision legislation, the civil law which is based on codified shares and allocated responsibilities expressed through proportionate entitlements in estates, is being qualified through a range of disqualifying and varying mechanisms.

This volume is the fifth of the published deliberations of the International Academy of Estate and Trust Law. It contains the work of solicitors, barristers, notaires, judges and Professors of Law in areas of Trusts, Inheritance and Succession Law, Tax and Comparative law. It will be of interest to practitioners and scholars alike in the area of trust and estate law.