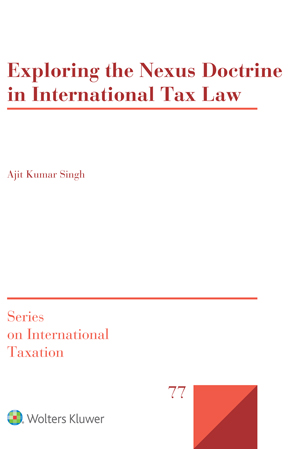 Exploring the Nexus Doctrine in International Tax Law examines the concepts of territorial nexus for jurisdictional tax apportionment and brings into sharp focus the emerging economic connection as a jurisprudential justification for taxing non-residents’ income. In an age when cross-border business transactions are increasingly affected without the transference of physical products, revenue concerns of states have led to a multitude of tax disputes based on the concept of ‘nexus’. This important and timely book is the most authoritative to date to discuss one of the major tax topics of our time – the question of how taxing rights on income generated from cross-border activities in the digital age should be allocated among jurisdictions.

Exposing an urgently needed missing link in the international source rule literature and taking a giant step towards solving the thorny question of appropriate tax apportionment, the book written by Dr Ajit Kumar Singh ¿ a Senior Commissioner of Income Tax and a Member of the Dispute Resolution Panel of the Government of India – addresses such dimensions of the subject as the following:

The book offers a thorough historical exposition of strict territorial nexus as a normative principle of source taxation, with a detailed scrutiny of the linkages of the nexus principle with classical theoretical precincts such as benefit, neutrality and international equity theories.

The book sheds light on the policies states may adopt when signing new tax treaties, so that unintended results may be foreseen and avoided, and it is a compulsory read not only for the law students of Indian and other universities and their researchers but also for the tax practitioners who wish to foster a better understanding of the constitutional doctrine of extraterritoriality or due process in the context of source rule jurisprudence. Tax practitioners, taxation authorities, and academic researchers in the field of international tax law and policy will greatly appreciate the book’s forthright enhancement of the ability to defend challenges based on the nexus doctrine.

Introduction: The Politics of Taxation

Historical Evolution of the Source Rule and Its Theoretical Underpinnings

The Nexus Debate in Treaty Structures: A Comparative Critique of the OECD and UN Models

Strict Territorial Nexus and the Principles of International Law

Table of Treaties and Conventions