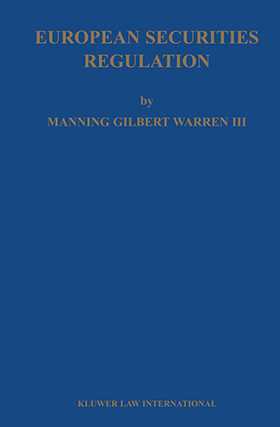 Qty.
Add to Cart
For general delivery times, please see our Shipping Policy
Share
Overview
Although efforts to regulate securities at a supranational European level date back to the first company law directive in 1968, it is only since the promulgation of the 1999 Financial Services Action Plan that the playing field has shown any real leveling for market participants. Now, since the adoption in June 2001 of the European Securities Committee as a rule-making authority implementing financial services directives, European securities regulation has emerged as a new and discrete field of legal scholarship. This authoritative book, by a well-known scholar who has been following the European frontier of securities regulation for over a decade, is the first to systematically map this dramatically accelerating new discipline and open the field to research, development, and specialization.

Approaching the subject along six major avenues¿the value of substantive rules; regulatory harmonization; the underlying regulatory methodologies of enacted and proposed European directives; the common market prospectus for securities offerings; investment services; and insider trading¿Professor Warren never loses sight of the historical context within which European securities regulation has developed, nor of the global economic environment in which it must meet exacting standards of efficiency and transparency. His analysis clearly explains the securities implications of the European laws already adopted as a result of the European Commission¿s implementation of the Financial Services Action Plan (including the European Company Statute), and also points out the areas that still demand legislative and regulatory attention (including the essential development of an efficient centralized or cross-linked clearance and settlement system).