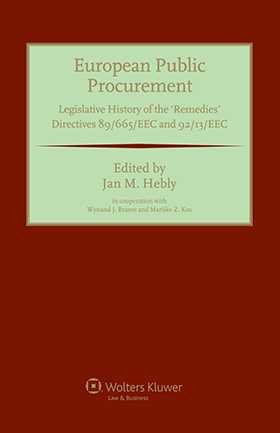 The third in Dr Hebly’s remarkable series of legislative histories of European law concerning the procurement procedures of contracting authorities in the classical sectors and entities operating in the water, energy, transport, and postal services sectors, this volume focuses on review procedures and remedies as specified in Directives 89/665/EEC and 92/13/EEC, as amended by Directive 2007/66/EC. Earlier publications involved the legislative history of Directive 2004/17/EC (contract rules and procedures) and Directive 2004/18/EC (coordination of procedures for awarding contracts). This new volume gathers in one place all the relevant documents that led to the adoption of the Remedies Directives, as well as to their subsequent amendments. In great detail it clearly reveals the negotiation and compromise over the realization of the legislative objectives, clearly explaining the evolution of such crucial elements and outcomes of the debate as the following:

Included are the final texts of the Remedies Directives, unofficial consolidated texts, and documents that were formative in the implementation of the Directives (including proposals, common positions, and compromise texts), as well as highlighted excerpts that give an insight into the drafting of the final texts. A list of legislative documents offers as complete an overview as possible of every item that played a role in the creation of the Remedies Directives, including amendments since the Directives came into effect. Along with its companion volumes, this important book will be a powerful resource for lawyers and policymakers engaged in the practice and development of European procurement law, and an incomparable desktop reference for scholars and researchers in the field.