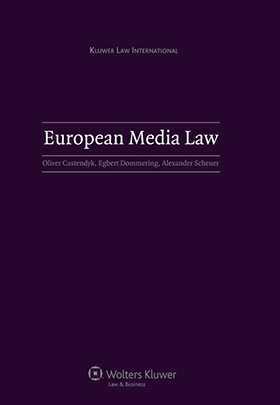 European Union legislation concerning electronic communications media is firmly established as an essential part of the law in the field in Europe. From relevant provisions of the European Convention of Human Rights and the EC Treaty to numerous directives, the most recent being the Audiovisual Media Services Directive 2007, a supranational and interrelated regime lays an extensive groundwork on which practitioners, regulators, and service providers and other enterprises in all EU Member States must rely.

Now, for all these and other interested parties, this book supplies the first in-depth commentary on EU media law, with detailed analysis of all important legislation and court decisions. Leading European lawyers with vast knowledge and practical experience of media law provide detailed expert commentary on the following:

• the Television without Frontiers Directive;

• directives on advertising, on copyright, on e-commerce, and on electronic communications;

• relevant primary law such as Article 49–55 EC on the freedom to provide services, the competition and state aid rules of Articles 81, 82, 86, 87, including the merger regulation, and Article 151 on culture; and

• Article 10 of the European Convention on the protection of Human Rights and Fundamental Freedoms.

The commentary interprets the law whenever possible article by article, section by section, and concept by concept, with reference to relevant case law and legal literature as issues arise. Illustrating their reasoning throughout with practical examples, the authors also take account of anticipated developments and future reforms that are likely to have an impact on the existing legislation. All texts are structured in paragraphs that are consecutively numbered to enable easy cross-referencing.

Because national audiovisual media law must be interpreted in the light of primary and secondary European law, the commentary is vital for the interpretation not only of European media law but of national media regulation as well.

In its analysis not only of the legal texts themselves, but also of the interrelation between the different laws and regulations, this book will be welcomed by legal practitioners, the media industry, lobbying groups, lawmakers, regulatory authorities, and broadcasters, as well as media service providers and academics.

The project of which this book is the result was supported by the Institute of European Media Law, the Erich Pommer Institut for Media Law and Media Economics, and the Institute for Information Law of the Law Faculty of the University of Amsterdam.