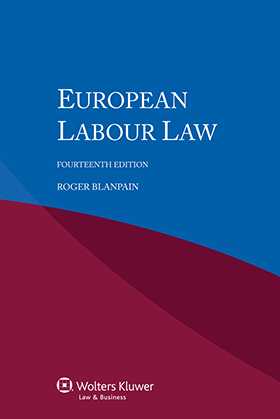 The vast single labour market of the European Union continues to manifest an ever-increasing interdependence of economies, companies, trade unions and employees, calling once again for an update of Roger Blanpain’s magisterial European Labour Law. This Fourteenth Edition remains the preeminent practice guide in its field, covering the full spectrum – legislation, collective agreements, and more than 400 cases – of both individual and collective labour law and practice from the fundamental freedoms to the significance of the Reform Treaty of Lisbon. Among the abundant new material in the Fourteenth Edition the reader will find incisive commentary and analysis of such issues and trends as the following EU action plans regarding equal treatment:

Recognizing the impact of the EU on labour law and especially the crucial role of the European Court of Justice, the Fourteenth Edition updates the book’s case law regarding such important issues as free movement of labour, freedom of services, and equal treatment. It also surveys the possibilities for European-wide collective agreements, as the social dialogue is evaluated against the background of European social realities. A comprehensive general introduction details how the Community institutions affect labour law, focusing on the legislative process in the EU and its relationship to other international organizations, especially the ILO. Special attention is given to the role of the European social partners – Business Europe, CEEP, UEAPME and the ETUC. In this context the author also elucidates the role of such organs as the Economic and Social Committee and the European Social Fund. As in previous editions, the Fourteenth Edition includes such user-friendly features as appendices presenting primary texts, a bibliography, an alphabetical list of cited cases from the European Court of Justice, and an index.