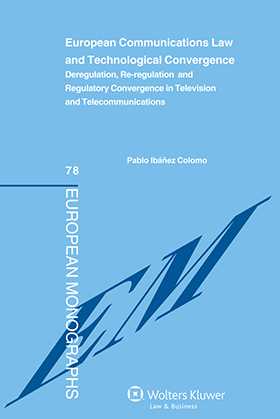 This book presents a thorough critical examination of the European regulatory reaction to technological convergence, tracing the explicit and implicit mechanisms through which emerging concerns are incorporated into regulation and competition law, and then goes on to identify the patterns that underlie these responses so as to establish the extent to which the issues at stake, and the implications of intervention, are fully understood and considered by authorities. Focusing on ‘conflict points’ – areas of tension inevitably arising among overlapping regimes – the analysis covers such elements as the following:

Endorsing the adjustment of existing rules to meet pluralist objectives, the author outlines a single, coherent regulatory approach. He shows how a careful analysis of the implications of technological convergence helps to solve conflicts between regimes. Specifically, the analysis addresses the level – national or EU – at which particular regulatory responses should emerge, the objectives guiding action, and the tools through which these objectives may be pursued. These conclusions command the attention of policymakers, regulators, and lawyers active in the ongoing development of communications law.

With a foreword by Joaquín Almunia.

This work was awarded the 2011 Jacques Lassier Prize.

Part I The Multiplication of Regulatory Regimes in Communications Markets.

Chapter 1 Technological Convergence and Its Impact on Television and Telecommunications.

Chapter 3 The Rise of Competition Law as a Source of Television Regulation.

Chapter 4 Technological Convergence and the Regulation of Telecommunications: Achievements and Limits of Re-regulatory Reforms.

Chapter 5 The Emergence of ‘Conflict Points’ between Regimes.

Part II An Assessment of Regulatory Choices in ‘Conflict Points’ between Regimes.

Chapter 6 The Acquisition and the Exploitation of Television Rights: Competition Law and Rivalry Bias.

Chapter 7 The Exploitation of Television Channels: The Limits of the ‘Logic of Foreclosure’.

Chapter 9 Reassessing the Role and Scope of Regulatory Regimes.