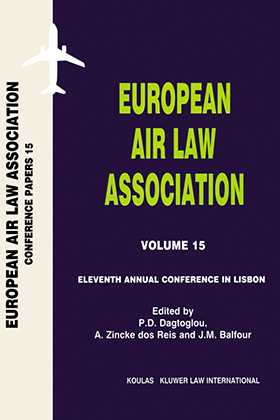 Qty.
This product is available for the standing order program. Learn More
Add to Cart
For general delivery times, please see our Shipping Policy
Share
Overview
In 1999 liberalisation of the air transport market in the EC has continued to have many positive results. As with US deregulation in 1978, it is clearly leading to growing consolidation, principally by way of alliances, and the Commission's ongoing investigation of the transatlantic airline alliances continues to dominate the agenda.

For all its positive results, there is some question as to whether liberalisation has been achieved at the cost of a deterioration in public service, despite the scope left by the 1992 third package for public service obligations.

With the increased competition resulting from liberalisation, airlines have come under pressure to cut costs. A prime target has been distribution costs, assisted by developments in technology. This is leading to differences in the relationship between airlines and travel agents and in the role of agents.

In its communication on the European airline industry adopted in May 1999, the Commission made it clear that the completion of the single market in air transport with a genuine external dimension, particularly involving the US, is a priority.

All these topical issues have been discussed at the Association's annual conference for 1999. The Association is grateful to TAP for its generous assistance with air travel to/from Lisbon.