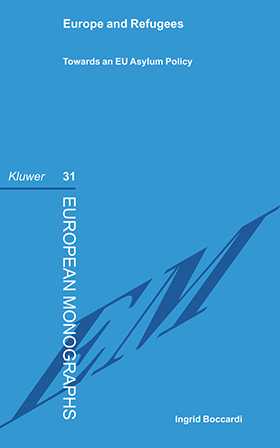 Qty.
This product is available for the standing order program. Learn More
Add to Cart
For general delivery times, please see our Shipping Policy
Share
Overview
With the flow of refugees showing no sign of abating, European states - and civil society - continue to look to the EU for a comprehensive asylum policy.

Here is a thoroughly researched book that not only investigates the existing institutional patterns that might successfully engender such a policy, but also focuses on the sensitive element of the refugee plight as an essential component of the protection of Human Rights within the Western democratic model.

Beginning with a survey of the international foundations of refugee protection (such as the 1951 Geneva Convention and the UNHCR) and the way they have evolved over the last four decades, the author analyses the initial attempts of EC countries to co-ordinate their asylum measures through the European Political Cooperation and the later Schengen arrangements.

Proceeding with an assessment of the operating structures set up for asylum coordination under the Maastricht Treaty and the EU initiatives that were undertaken within the Third Pillar framework - and the particular problems that they presented - she continues by analysing in detail the new complex asylum framework that emerged in 1997 with the Amsterdam Treaty.

The roles played by the subsequent Tampere European Council and the recent Nice Treaty are also explored, both for their initiatives and for their fine-tuning of the decision-making processes of the new EU asylum cooperation. Finally, the author evaluates the possible impact that the EU Charter of Fundamental Rights, approved at Nice, might have on strengthening the Human Rights dimension of asylum in future EU action.

Throughout, full attention is given to the work of all relevant EU bodies, as well as that of the UNHCR, the European Court of Human Rights, and the NGOs most active in the field. Europe and Refugees is essential reading for everyone concerned with asylum policy, undeniably one of the most urgent problems confronting today's world order.