Loading...
Store International EU Law and Harmonization of Takeovers in the Internal Market 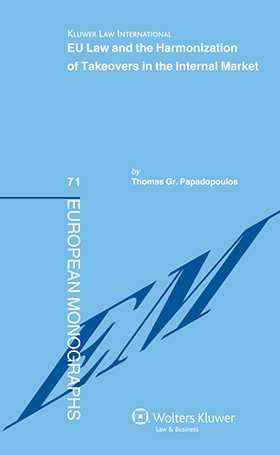 EU Law and Harmonization of Takeovers in the Internal Market

Takeover bids are important for the internal market because they contribute to market integration and to business consolidation in accordance with the European Community Treaty provisions on the freedom of establishment. The Takeover Bid Directive of 2004 is designed not only to protect the interests of the holders of securities of companies (in particular, those with minority holdings), but also, to promote European Union- (EU) wide clarity and transparency with respect to legal issues to be settled in the event of takeover bids and to prevent patterns of corporate restructuring from being distorted by arbitrary differences in governance and management cultures. Analysing the Takeover Bid Directive in light of EU Law, this important monograph examines the extent to which the Directive facilitates the exercise of the fundamental freedom of establishment and the free movement of capital in the internal market.

The analysis begins with a discussion of the fundamental freedom of establishment of companies, as well as of the legal bases for the harmonization of company law and capital markets law at the EU level. Additionally, the significance of corporate mobility and of the freedom of establishment case law of the European Court of Justice for the takeover process is analysed. The author shows that, far from achieving market integration in the field of EU company law, the Takeover Bid Directive is a compromise resulting from the very different legal and policy approaches of the Member States in the field of takeover regulation. Although some provisions of the Directive are obligatory for all Member States, two key provisions have been made optional: the non-frustration rule, which requires a board of directors to obtain the prior authorization of a general meeting of shareholders before taking any action that could result in the frustration of the bid; and the breakthrough rule, which restricts significant transfer and voting rights during the time allowed for acceptance of the bid.

Other relevant legal issues covered in the course of the analysis include the following:

• the right of establishment as a right of legal persons;

• the effect of the principle of subsidiarity;

• the Takeover Report of the High-Level Group of Company Law Experts;

• the non-frustration/board neutrality rule; and

Chapter 1 The Fundamental Freedom of Establishment of Companies.

Chapter 2 Legal Bases for the Harmonization of Company Law and Capital Market Law at the EU Level.

Chapter 5 Weaknesses and Difficulties in Harmonization Efforts in the Field of EU Company Law.

Chapter 6 Establishing an Internal Market for Companies: Market Integration in the Area of EU Company Law.

Chapter 7 The Relationship between the Treaty Provisions on Freedom of Establishment of Companies and Takeover Bids.

Chapter 8 The Significance of the Corporate Mobility Case Law for the Takeover Process.

Chapter 11 An Overview of the Takeover Bid Directive in the Context of the Internal Market.

Chapter 12 The Direct Effect of the Fundamental Freedoms in EU Law.

Chapter 13 Horizontality after Viking and Mangold..

Chapter 14 The Extent to Which Conduct of the Board and Articles in the Corporate Constitution Might be Said to Constitute Restrictions on the Freedom of Establishment and on the Free Movement of Capital.