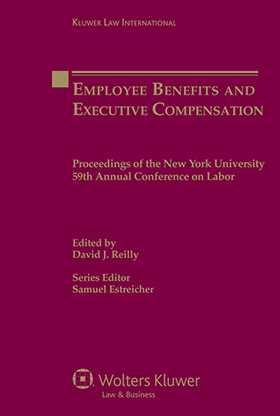 Most employers know that rewarding their best workers is good business. However, the “return” on such investment is difficult to measure, and wise employers think long and hard about two of their largest expense items – employee benefits and executive compensation. Today in the United States, under the glare of issues raised by the current financial crisis, company-sponsored benefits programs have become mere shadows of what they once were, and executive compensation has come under intense scrutiny to the point where the Treasury Department monitors it at companies receiving federal assistance. In recognition of the growing importance of employee benefits and executive compensation issues, the Center for Labor and Employment Law at New York University School of Law dedicated New York University’s 59th Annual Conference on Labor to an in-depth examination of these topics.

This volume of the proceedings of the 2006 conference contains papers presented at that meeting, all here updated to reflect recent developments. It also includes contributions from other practitioners and academics with extensive knowledge and experience in this specialized field of labor and employment law. Among the topics presented and discussed are the following:

• the structure and adequacy of the U.S. system of providing for retirement income;

• impact and implications of the Pension Protection Act of 2006 (PPA);

• benefits issues for foreign workers in the United States, both documented and undocumented;

• issues for companies that adopt stock acquisition programs as an employee compensation vehicle;

• recent healthcare reform proposals at the state level as pilot projects for a national system;

• the ERISA preemption scheme and denial of coverage under an ERISA-governed health care plan; and

As always, this annual conference captures valuable insights and syntheses of central labor and employment law issues in the United States and will be of great value to practitioners and academics in the field.