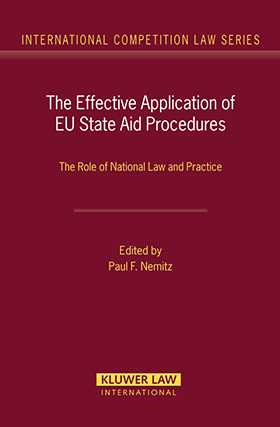 
National practice, law, and jurisprudence on state aid are developing rapidly in the present context of EU decentralization. Although the EU rules governing state aid are widely discussed, there has been until now a dearth of practice-oriented material on the actual implementation of these rules at the national level. This important contribution to the ongoing debate on the reform of the state aid system addresses for the first time the full scale of procedural questions arising in the implementation of EU state aid law. It covers all issues, ranging from the intention to grant an aid via judicial protection for competitors right through to recovery of aid and judicial protection of the beneficiary. The book presents the documentation on state aid which was made available to the participants of the 22nd World Congress of the Fédération Internationale de Droit Européenne (FIDE) at Cyprus in November 2006. Detailed reports by well-known practitioners or professors of law discuss and analyze the implementation of EU State aid law in 17 EU Member States, as well as Norway, Switzerland, and Croatia. The national reports, based on a standard questionnaire, are preceded by an analytical general report, comparing and assessing results of the analysis of Member States’ law in the light of Community law, and an EU report on state aid procedures. Issues addressed include the following:

• ensuring compliance with the notification obligation;

• ensuring the compatibility of aid and the application of block exemptions;

• limitation of judicial review; and

• the position of state aid debt in bankruptcy proceedings.

No serious academic contribution to the present debate on the reform of state aid law can afford to ignore this book. As a unique and thorough overview of state-of-the-art knowledge on national law and practice on EU State aid matters, this compendium will be of inestimable value to practitioners involved in representing interests of beneficiaries and competitors before national authorities or national courts, or before the European Commission or European Courts. The analyses will also be welcomed by authorities granting state aid, including public enterprises.