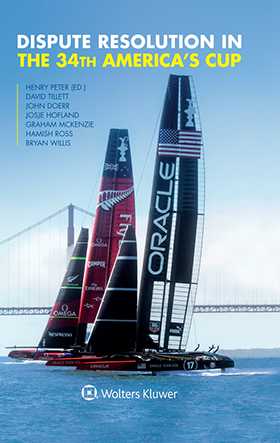 Qty.
Add to Cart
* For general delivery times, please see our Shipping Policy
Share
Overview
The America’s Cup continues to evolve as the preeminent sporting contest in the world of sailing and is one of the greatest contests in the world of sport. In its long and colorful history, disputes around the match have not only added major extra publicity to the event’s great popular appeal but also spawned a wealth of judicial and arbitral decisions that have become influential on the sport of sailing. This book – continuing the tradition of Kluwer Law International’s earlier publications on the 31st, 32nd, and 33rd America’s Cup – offers richly detailed expert commentary (along with the decision texts themselves) on the judgments of various courts and other dispute resolution bodies delivered during the tumultuous 34th America’s Cup. Since there is no official record of many of these documents, this book is the only source that presents them together in a single volume, with the added benefit of commentary. Among the aspects covered are the following: A general introduction surveys the most important and peculiar issues pertaining to the event. Written not only as a comprehensive legal record of the 34th America’s Cup but also with a view to favor future matches and to limit the possibilities of new controversies, the book takes a signif-icant step toward ensuring that disputes are dealt with by arbitration and not by lengthy, costly, and uncertain state court proceedings. In this way the book provides invaluable guidance for trustees, competitors, and event officials, not only for the America’s Cup but by extension to other major international sporting events.
Table of Contents