Loading...
We know your business is rapidly adapting to the global COVID-19 outbreak. If you need assistance with your Wolters Kluwer products or would like to get more information on a complimentary Guest Pass to any of our online products, please contact your representative. To help you stay informed and navigate the changes, Wolters Kluwer is providing free insights and resources. View Resources here >> Close
Store International Dispute Resolution in Austria: An Introduction 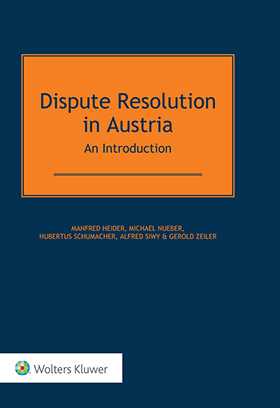 Dispute Resolution in Austria: An Introduction

Qty.
Add to Cart
Share
Overview
This very useful book arms litigation and arbitration practitioners and in-house counsel with a detailed description of the Austrian procedural law governing proceedings before both Austrian domestic courts and arbitral tribunals seated in Austria. Divided equally between arbitration and litigation, with a concluding chapter on the role of relevant international conventions and treaties, the book provides a practical approach to users of the Austrian law on dispute resolution. While it includes detailed references and examples of the jurisprudence of Austrian courts and the opinions of Austrian academics, its great value lies in the straightforward answers it provides foreign lawyers to questions that arise during proceedings in Austria. Issues and topics covered include the following: This is the first detailed English-language portrayal of the Austrian legal situation à propos dispute resolution. It allows practitioners to quickly grasp an overview of the Austrian practice in both arbitration and litigation while simultaneously ensuring the required depth to fully understand the legal background of this practice.
Table of Contents