Loading...
We know your business is rapidly adapting to the global COVID-19 outbreak. If you need assistance with your Wolters Kluwer products or would like to get more information on a complimentary Guest Pass to any of our online products, please contact your representative. To help you stay informed and navigate the changes, Wolters Kluwer is providing free insights and resources. View Resources here >> Close
Store International Digest Of Cas Awards III, 2001-2003 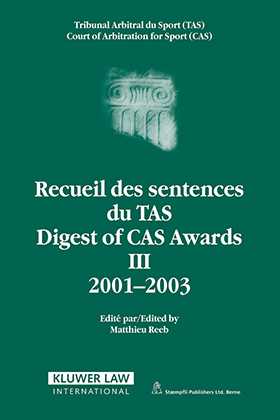 The Court of Arbitration for Sport (CAS) provides international sport with an organisation dedicated to the settlement of sporting disputes swiftly and inexpensively. Its decisions are equivalent to judgments passed by state courts. Since its inception in 1984, it has time and time again earned the recognition and respect of all stakeholders in the sporting world.

This third volume of major CAS decisions covers the years 2001, 2002 and 2003, including those decisions issued during the Olympic Games in Salt Lake City. In line with the first two compilations (which cover awards issued from 1986 to 2000), it continues to prepare the ground for a specialised case law, a real lex sportiva in development. It also contains all essential texts regarding the organisation and activities of CAS. Like the earlier volumes (the first of which won the René Cassin Prize, awarded every three years by the Académie Française des Sciences Morales et Politiques, in 1999), most decisions in Volume III are presented in both English and French.

Matthieu Reeb is the Secretary General of the CAS and responsible for the management of the court, supervising the arbitration procedures and organising the CAS ad hoc divisions established during the Olympic Games and Commonwealth Games. In addition to editing the CAS Digests, Matthieu Reeb is also the author of several articles related to the CAS and its case law.

Earlier volumes of the Digest have found a wide readership. This update is sure to continue that interest, especially with its detailed references, invaluable to legal practitioners, to sports law and arbitration. Sports organisation officials also will discover here an incomparable source of legal information.