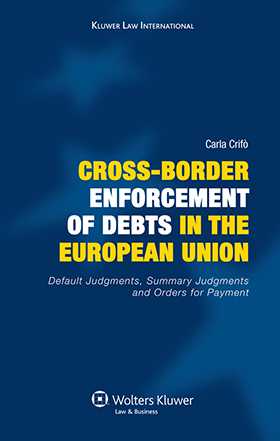 To be enforceable, a foreign judgement needs some kind of ‘passport’ so that it can be given the same treatment as a judgement given at home. This is particularly true of monetary obligations. In Europe, the tension between the need for cross-border portability of such obligations and their enforcement, on the one hand, and sovereign states’ judicial control over enforcement of domestic and foreign judgements, on the other, has been addressed repeatedly by the European Court of Justice and the Commission and Council of the European Communities, most recently through the notion of ‘mutual trust.’ However, despite concerted efforts to establish some harmonization in this area, substantial divergences persist between the Member States’ procedural systems as regards the definition of an enforcement order, the procedures for enforcing judgements and, above all, the status, powers and responsibilities of enforcement officials. This major new exploration of the current status of cross-border enforcement of debts in Europe offers in-depth analysis of the most recent relevant regulation at the European Union level, as well as the default domestic regulation in England and Wales, Germany, France, Italy and Spain- five jurisdictions chosen due to the very thick web of relations they have had with each other as part of the established European order. The author provides detailed consideration of such elements of the legal landscape as the following:

In the context of the intense academic and practical debate around what is being called ‘European civil procedure,’ this book contributes signally to the Commission’s stated objective of ensuring ‘as globally as possible a swift, efficient and inexpensive access to justice.’ The author details the procedural measures prescribed by the relevant directives (and their case law so far), and incidentally provides a convenient conduit to the appropriate material on the websites of the European Judicial Network and the Judicial Atlas in each jurisdiction. As lawyers continue, in the absence of ‘mutual trust’, to apply their own historic and philosophical meaning to the ‘harmonized’ procedures – no matter how much this approach is discouraged in the preambles to the regulations and directives – this book greatly illuminates the way forward in a difficult but extremely important area of European law.
Table of Contents