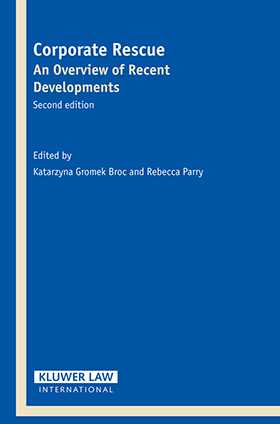 It is primarily to corporate rescue procedures and reforms adopted at the domestic level that this book is devoted. Individual chapters—each written by an expert or team of experts from the country under scrutiny—consider recent developments and prospects for the future in:

• and the United States.

These countries were chosen because they reflect different stages of development in corporate rescue laws. Some have mature systems in their second or third stages of revision; some have relatively antiquated systems that have been inherited from, or modelled on, the laws of another jurisdiction; and some are transitional economies where the concept of corporate rescue is comparatively new. A final chapter covers important issues stemming from conflict of laws and supranational models and guidelines.

About the editors and contributors. Preface. Acknowledgements. 1. Introduction; R. Parry. 2. A Critical Evaluation of the Development and Reform of the Corporate Rescue Procedures in France; M.-J. Campana. 3. The Progress of Reforms to Insolvency Law and Practice in France; P.J. Omar. 4. German Statutory Corporate Rescue Proceedings: The Insolvenzplan Procedure; Eckart Ehlers LLM. 5. An Overview of the Italian Insolvency Procedures and Proposed Reforms; A. Jorio. 6. Insolvency Proceedings in Spain. An Overview of the Proposed Insolvency Laws; R. Sebastián, J. Pereda. 7. The Swedish Reorganization Law; A. Holmgren. 8. United Kingdom: Administrative Receiverships and Administrations; R. Parry. 9. Company Voluntary Arrangements and the `Rescue Culture in the Light of the Insolvency Act 2000; K. Gromek Broc. 10. Cross-border Insolvency in the European Context; K. Dawson. Bibliography.