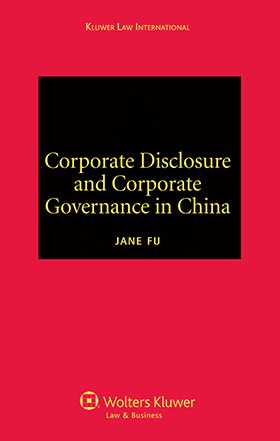 Rapid economic development has focused attention from around the world upon China’s corporate governance regime – particularly as, during the past few years, some of China’s companies, mainly large, state-owned companies, have been aggressively buying foreign businesses overseas. China’s huge capital injection and aggressive foreign investments have raised increasing and deep concerns among the target countries’ governments, their business communities, and the global public. It is clearly of great importance that the People’s Republic of China’s business-partner countries understand corporate governance issues within Chinese companies. Moreover, the relatively poor corporate governance of many Chinese state-owned companies calls for a closer look at China’s corporate governance theory and practice. The corporate disclosure regime plays a critical role in this regard. This timely and highly informative book provides, for the first time, comprehensive research on corporate governance in China, with detailed attention to the formation and reform of its corporate disclosure laws and regulations. Among the many factors analysed are the following:

• the role of the government in the management of state-owned companies;

• the legal and regulatory environment;

• the increasing independence of the boards of directors;

• the role of institutional investors;

• the external governance structure; and

• the absence of fiduciary duty.

The author describes the nature of the many breaches of disclosure laws and rules in the two decades or so of the history of China’s securities market and the pressures within the relevant government agencies confronting the problem. As a detailed analysis of the Chinese corporate disclosure regime that has emerged during the period of China’s economic transition since the 1990s, this incomparable book will be of great interest to legal researchers, policymakers, and legal practitioners working with business investments in China.