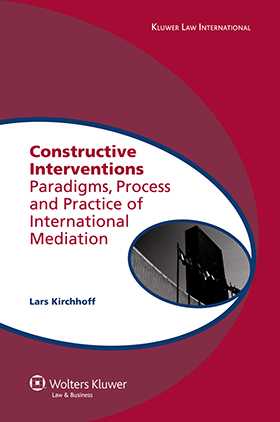 In the contemporary discipline of conflict resolution, adjudication and alternative dispute resolution (ADR) are often seen as antagonistic trends. This important book contends that, on the contrary, it is the bringing together of these trends that holds the most promise for an effective system of international justice. With great insight and passion, built firmly on a vast knowledge of the field, Lars Kirchhoff exposes the contemporary structural barriers to effective conflict resolution, defining where adjudication ends and ADR—and particularly the recent development of mediated third party intervention from an ‘art’ to a veritable ‘science’—must come into play.

The work starts by defining the challenges, potentials and shortcomings of different approaches to conflict resolution in an interdependent world—where the multiplicity of actors, topics and interests involved even in seemingly bilateral conflict situations is clearly manifest—and goes on to define useful models and connect the various elements relevant for the resolution of conflicts in a transparent way. In the course of its investigation the book accomplishes the following:

• illustrates the various departure points and perspectives scholars of conflict resolution have taken as the basis for their work;

• discusses who should become involved in conflicts as a third party and by which techniques this should occur;

• systematically conveys the nature and consequences of intervention through mediation, focusing on the method’s critical challenges; and

• clarifies the particular model of international mediation under development through UN initiatives..

It is the conviction of many intermediaries and scholars that the considerable potential inherent in resolving conflicts peacefully is rarely put into practice. Although some of the reasons for this phenomenon are beyond the influence of scholarly debate, in many instances the reasons for failure of peaceful resolution processes are more structural or systemic in nature. It is the great virtue of this book that it establishes enough clarity in an unclear and complex field to make concrete and workable recommendations in these instances, and for that reason it will be of immeasurable value and benefit to all scholars, policymakers, and activists dedicated to the pursuit of peace.


Preface. Aims and Design of the Book.