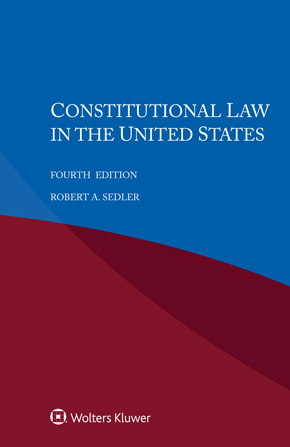 By Robert A. Sedler
Format
Softcover

Derived from the renowned multi-volume International Encyclopaedia of Laws, this very useful analysis of constitutional law in the United States provides essential information on the country’s sources of constitutional law, its form of government, and its administrative structure. Lawyers who handle transnational matters will appreciate the clarifications of particular terminology and its application. Throughout the book, the treatment emphasizes the specific points at which constitutional law affects the interpretation of legal rules and procedure.

Thorough coverage by a local expert fully describes the political system, the historical background, the role of treaties, legislation, jurisprudence, and administrative regulations. The discussion of the form and structure of government outlines its legal status, the jurisdiction and workings of the central state organs, the subdivisions of the state, its decentralized authorities, and concepts of citizenship. Special issues include the legal position of aliens, foreign relations, taxing and spending powers, emergency laws, the power of the military, and the constitutional relationship between church and state. Details are presented in such a way that readers who are unfamiliar with specific terms and concepts in varying contexts will fully grasp their meaning and significance.

Its succinct yet scholarly nature, as well as the practical quality of the information it provides, make this book a valuable time-saving tool for both practising and academic jurists. Lawyers representing parties with interests in the United States will welcome this guide, and academics and researchers will appreciate its value in the study of comparative constitutional law.

Part I. Sources of Constitutional Law

Chapter 2. Constitutional Interpretation: The Role of the Supreme Court

Chapter 4. Separation of Powers and Conflicts Between Congress and the President

Part III. The State and Its Subdivisions

Chapter 3. The Interaction Between Federal and State Power

Chapter 4. The States and “National Unity”

Part IV. Citizenship and the Administration of Justice

Chapter 3. The Relationship Between Church and State