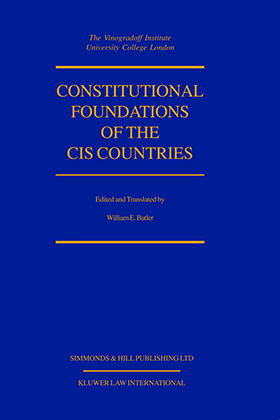 Qty.
Add to Cart
For general delivery times, please see our Shipping Policy
Share
Overview
Nowhere today is constitutional law more avidly debated and studied than in the twelve post-soviet republics known as the Commonwealth of Independent States (CIS). Drawing on past experience as well as on European, American and Asian models, the constitutions of these countries have a great deal to tell the legal scholar about how the independent states of the post-Cold-War world understand the transition to a market economy.

Constitutional Foundations of the CIS Countries is a remarkable work of scholarship and synthesis. Its new, eminently readable English translations accurately present the current (1999) constitutional laws of all twelve CIS countries. The author and translator--himself active as an adviser on constitutional reform in several of these states--has taken extreme care to establish the most authentic sources through an exhaustive investigation of the existing documents and through personal interviews.

From a great mass of confusing and often contradictory material in a dozen languages, he has assembled a coherent and authoritative collection of essential documents that allows us to see the lineaments of constitutional law at a crucial stage of development in this fast-changing region of great economic significance.