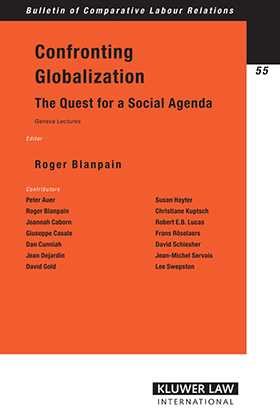 There is mounting evidence that the economic globalisation project initiated after the fall of the Soviet Union is not keeping its promise of open societies and a freer exchange of goods, knowledge, ideas and more social justice. In fac, there are strong indications that such benefits are not equally divided, so between north and south and developed and developing countries. Responding to this evidence, the International Labour Organisation (ILO) established the World Commission on the Social Dimension of Globalisation in February 2002. In February 2004, following numerous international and regional conferences and consultations, the Commission's report, A Fair Globalization: Creating Opportunities for All, was presented to the Governing Body of the International Labour Organization, to the Secretary General of the United Nations, and to the heads of other UN agencies, the World Bank, the International Monetary Fund, and the World Trade Organization. This volume represents the first in-depth evaluation of this important report.

The analyses and commentaries collected in this volume accomplish two essential tasks. They detail the findings and recommendations of the Commission, and they also spell out the implications of the Commission's report for the ongoing viability of economic globalisation in practice. The authors include ILO officials, representatives of both employers and labour unions, specialists in various work-related professions, and academics in disciplines related to work and society. Among the vital issues and topics covered are the following:

Several authors deal with the role played by other international organisations like the OECD and the EU regarding the social aspects of globalisation. Two important EU documents on the promotion of core labour standards and on the social dimension of globalisation are reprinted here.

Treating as it does one of the major problems our generation-how to see to it that globalisation benefits all of us and not only a few-Confronting Globalisation: The Quest for a Social Agenda promises to take its place as an indispensable resource for practitioners in many fields, from labour and employment law to health care and environmental policy. It is not too much to say that this book represents an immensely valuable contribution and commitment to the future well-being of the world we live in.