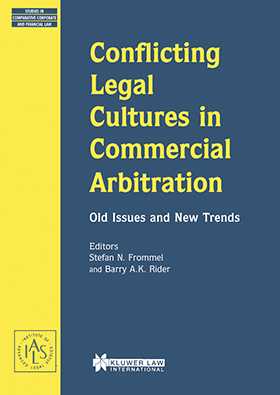 Qty.
This product is available for the standing order program. Learn More
Add to Cart
* For general delivery times, please see our Shipping Policy
Share
Overview
The great strength of the arbitration process lies in its independence from any particular legal culture. Inevitably, its cross-cultural perspective has brought it to the fore as the preferred means of resolving international commercial disputes.

The Institute of Advanced Legal Studies in London has done more than any other group to promote and sustain the development of international arbitration and to define the law and practice that has grown up around it. In a series of remarkable public lectures held during its jubilee year, the Institute reasserted its preeminent and creative role in the field of alternative dispute resolution at the international level. These lectures form the basis of the insightful papers assembled in this book.

Conflicting Legal Cultures in Commercial Arbitration brings international arbitration as it is currently practised into sharp focus, and will be of great value to all practitioners, academics and students in the field.