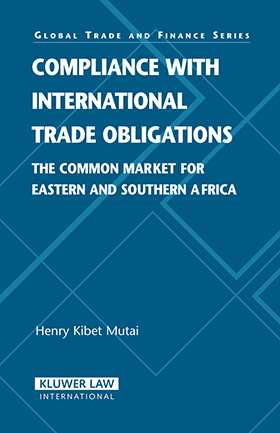 Compliance with International Trade Obligations: The Common Market for Eastern and Souther Africa


This important new book deals with the formation and regulation of regional trade agreements in the context of the WTO legal regime and Eastern and Southern African countries, specifically those nations that make up the Common Market for Eastern and Southern Africa (COMESA). Despite a poor track record, regional integration has for a long time been, and remains, the preferred path to economic development and poverty alleviation among developing countries in Africa. Regional integration undoubtedly holds great promise for developing nations in Africa. Many African countries stand to gain from pooling their meager resources and thus being able to participate more meaningfully in the international arena. However, the rhetoric surrounding integration has not been matched by actions and the record of trade liberalization has been weak. Substantive action appears to be taking a back seat to formal statements and declarations. This book consequently addresses four related critical issues: (1) compliance with rules and regime design, (2) the relationship between regionalism and multilateralism, (3) the legal regime created by Article XXIV and the Enabling Clause of the General Agreement on Tariffs and Trade, and (4) the COMESA legal regime.

Introduction and Overview Chapter one: The Role of Law in the Conduct of International Trade Relations Chapter two: Regionalism, Multilateralism and free Trade- Theoretical Perspectives Chapter Three: The WTO’s Regulatory regime for regional Trade agreements: A Managerial Chapter four: Regional Integration and Trade Liberalisation in eastern and southern Africa: Order or Disorder? Chapter five: The Comesa Treaty: A Managerial perspective Chapter six: Improving the effectiveness of the WTO: An assessment of the DOHA development round proposals Chapter seven: The regulation of regional Trade agreements: Enhancing the Effectiveness of the comesa Legal, Summary and Conclusion, Bibliography, APPENDIX I: Article XXIV, GATT 1947, APPENDIX II: The Enabling Clause, APPENDIX III: The Understanding on the Interpretation of Article XXIV of GATT 1994, APPENDIX IV: Dates and Reports of Meetings of the Negotiating Group on Rules, APPENDIX V: Submissions on RTAs to the Negotiating Group on Rules
Volumes
Related Products