Loading...
We know your business is rapidly adapting to the global COVID-19 outbreak. If you need assistance with your Wolters Kluwer products or would like to get more information on a complimentary Guest Pass to any of our online products, please contact your representative. To help you stay informed and navigate the changes, Wolters Kluwer is providing free insights and resources. View Resources here >> Close
Store International / NEW RELEASES Complex Arbitrations: Multi-party, Multi-contract & Multi-issue, Second Edition
Coming Soon 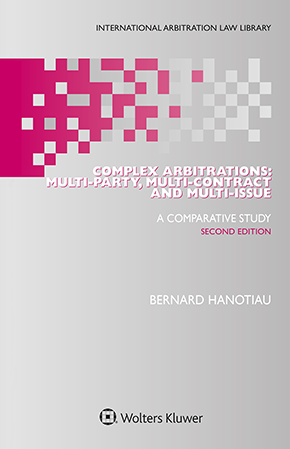 Complex Arbitrations: Multi-party, Multi-contract and Multi-issue is a fully updated and renewed second edition of the far-sighted 2006 guide that was extensively used and much appreciated worldwide. Arbitrations which involve two or more parties and complex multi-party issues are becoming very common and frequent year by year. This one-stop guide provides a comprehensive and unique in-depth analysis of the multiplicity of issues arising from multi-party and multi-contract arbitration. It includes the decisions of several hundreds of courts from all major arbitral jurisdictions in the world and ad hoc and institutional awards – published and unpublished – rendered in all parts of the world under the auspices of all leading institutions.

The theories based on which an arbitration clause may be “extended” to non-signatories, issues arising from groups of contracts, joinder of parties and consolidation of arbitration proceedings, enforcement of such awards and their res judicata effects are analysed in this book. The analysis highlights the following factors and issues:

This second edition will give an unlimited access to lawyers and corporate counsel to an expanded volume of arbitral awards and cases from many more jurisdictions, updates on new legislation and rules, and newly researched jurisprudence. This book will be of immense help in solving the increasingly complex procedural issues confronting them in dealing with multi-party and multi-contract disputes. It will also prove to be invaluable to law professors and students of dispute resolution.

Who are the Parties to the Contract(s) or to the Arbitration Clause(s) Contained Therein? The Theories Applied by Courts andArbitral Tribunals

May an Arbitration Clause be Extended to Non-signatories:Individuals, States or Other Companies of the Group?

Joinder of Parties and Joinder of Claims: Voluntary and Compelled Intervention of Third Parties, Cross-claims and Consolidation

Setting in Motion of Arbitral Proceedings and Appointment of Arbitrators

Enforcement of the Arbitral Award

A Selection of Provisions on Multiparty Arbitration in International Conventions, National Legislations and Institutional Rules

A Selection of Multiparty-Multicontract Arbitration Clauses