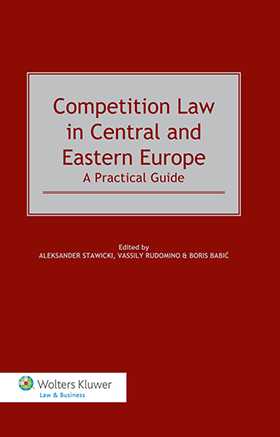 Competition Law in Central and Eastern Europe. A Practical Guide

Even though the development of competition law in the countries of the former Eastern bloc has been based to a significant extent on arrangements existing in the European Union – including the case law of European courts and various instruments developed by the European Commission – numerous substantial differences remain both in regulatory regimes and in ongoing practice among the various countries. This first-ever practical survey of competition law in this region describes applicable regimes in sixteen of these countries, with additional country chapters on Austria and Turkey and a chapter on the role of the Eurasian Economic Commission.

The authors are specialists in competition law, and each is recognized as an expert in his or her country. Each of their chapters describes the competition law and practice of a specific country, and covers such topics as the following:

"This will be an essential and informative resource in our daily work ." – Dr Theodor Thanner, Director General of the Federal Competition Authority of Austria

"A comprehensive review of antitrust law in Central and Eastern Europe. I commend the book to practitioners, regulators, academics and business people for its insights into antitrust legislation and cases in the region." – Mr Igor Artemiev, Head of the Federal Antimonopoly Service of the Russian Federation