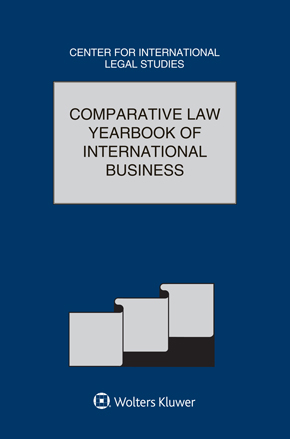 The 42nd issue of the Comparative Law Yearbook of International Business addresses a diverse range of topical issues of national and international consequence. Ranging from an analysis of the pari passu principle and its operation in corporate insolvency in the UK, to international trends regarding mediation and its future development under the new Singapore Convention, the findings presented in the 10 chapters of this edition will interest both those involved in and those studying the legal regime for cross-border business activities.

Authors from Argentina, Brazil, Colombia, France, Italy, Japan, Poland, Russia, Taiwan, and the United States of America examine a panoply of matters, e.g. relating to anti-corruption measures, arbitration, company law, competition law, financial law and mediation. The comparative analysis serves to highlight the strengths and weaknesses of approaches adopted, in particular jurisdictions by juxtaposing them with their equivalents in others in North America, Europe and beyond.

The Singapore Convention for Mediation: From Promotion to Workable Standards by Way of New York

The New EU Directive on Conversions, Mergers and Cross-Border Divisions

Some Considerations on Internal Investigations in Argentina

Exchange Control: Only for Developing Countries?

Recent Developments in the Implementation of 5G Technology and Its Benefits

Which European Regulation for Security Tokens?