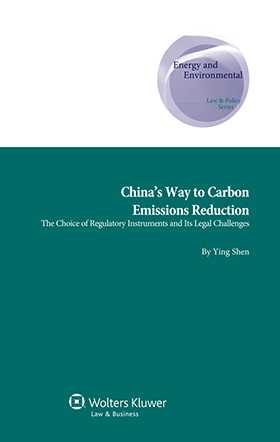 China's Way to Carbon Emissions Reduction: The Choice of Regulatory Instruments and Its Legal Challenges

Now that the most recent scientific estimates have shown that China has become the world’s largest source of greenhouse gas emissions, China’s influence on the world’s environment and sustainable development highlights the importance of tailoring Chinese climate change law to conform with the requirements of international conventions and agreements on climate change. This thorough analysis, based on an examination of climate status, legal background, and current regulatory systems in China, examines the potential role of different policy instruments in reducing carbon emissions in order to find an appropriate choice for China, and recommends approaches to key issues for relevant authorities.

The author conducts a comprehensive and in-depth study on the three mainstream environmental policy instruments used to control carbon emissions – the cap-and-trade system, the carbon tax, and command-and-control regulations – in a Chinese context. She reviews China’s current policies, and elucidates how the issues of climate change and global warming call for social, environmental, economic, and legal reforms in China, especially in the areas of administrative law and property rights law. Among the issues and topics covered are the following:key issues on designing and implementing each of the three policy instruments;

The analysis assesses the critical costs and benefits of each approach in the context of selected case studies, taking legal literature in the field fully into account. Given that the Chinese government is taking steps to reduce emissions by altering energy production and usage and is signalling a willingness to make similar commitments in a multilateral treaty, it is very timely and important for lawmakers and scholars, within and outside China, to think about new and appropriate regulatory measures to respond to the crisis and plan for a sustainable future. This study provides not only a useful benchmark for both China and other countries in formulating initiatives on enhancing climate protection, but also details the global implications for governments and for international organizations concerned with the understanding between China and the rest of the world in the context of climate change mitigation.

Chapter 8 Legal Challenges to Implementing an ETS in China

Chapter 9 Carbon Market Outlook: The Possible Linkage between China’s ETS and Other ETSs