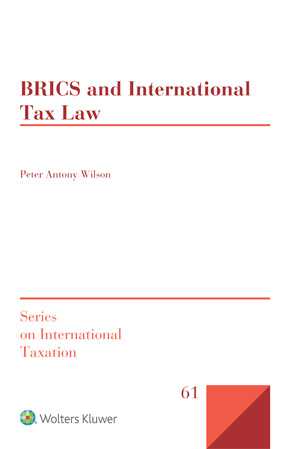 BRICS and International Tax Law provides an in-depth analysis of the BRICS international tax law and how it differs from the approach of the developed world especially focussing on the BRICS very broad approach to defining evasion. With the ongoing expansion of inbound and more recently outbound foreign direct investment (FDI) in the BRICS – with all of them at the same time listed among the top seven countries plagued by tax evasion and avoidance in the guise of illicit outflows – the five governments, both individually and through cooperative initiatives, have devised new international tax strategies which are proving to be of great interest to taxpayers and value to other countries tax authorities’, in developing and developed countries. The core of these strategies addresses the necessity of stemming the outflow of revenue while strongly supporting FDI, both inbound and outbound, while complying with international obligations including those arising from human rights laws. This book serves as the first in-depth commentary on this new and evolving area with qualitative surveys and interviews.

The detailed analysis covers the most important aspects of BRICS international tax law, including topics such as:

The analytical approach adopted by the author facilitates an understanding of the different countries’ approaches to these important concepts. Notably, the author personally conducted interviews with senior international representatives of certain of the BRICS tax authorities, as well as with leading BRICS academics and practitioners. Tax cases, together with human rights and investment cases, and administrative guidelines of all five countries are included in the analysis. This book concludes with recommendations for improving each of the five countries’ tax law and procedures, especially in the area of dispute resolution.

In light of the author’s goal of extending the existing body of knowledge of the BRICS international tax laws, this book assists in developing an understanding of the BRICS approach to dealing with evasion and avoidance and thereby establishing a basis for resolving international disputes which is compatible with sovereignty and FDI. In achieving this objective, this work proves to be of immeasurable value to tax advisers, government and governance officials, academics, and researchers. It helps them in analysing the relative compliance of business or investment transactions in any of the BRICS countries and between them and their bilateral partners and assists governments and tax authorities in developing international taxation strategies which are compliant with their international obligations. It also facilitates both taxpayers and tax authorities in resolving cross-border tax disputes.

CHAPTER 3
Evasion and Avoidance According to the BRICS