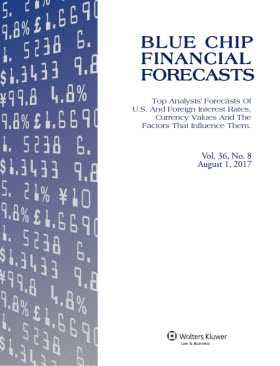 Blue Chip Financial Forecasts gives you the latest in prevailing opinion about the future direction and level of U.S. interest rates that is critical to the profitable management of your firm. Survey participants such as Bank of America, Goldman Sachs & Co., Swiss Re, Loomis, Sayles & Company, and J.P. MorganChase, provide forecasts for each of the next six quarters for the following variables:

Each forecaster's prediction is published along with the average, or consensus forecast, for each variable. There are also averages of the 10 highest and 10 lowest forecasts for each variable; a median forecast to eliminate the effects of extreme forecasts on the consensus; the number of forecasts raised, lowered, or left unchanged from a month ago; and a diffusion index that indicates shifts in sentiment that sometimes occur prior to changes in the consensus forecast.

In addition to each month's survey results, you get:

Long-Range Forecasts: In June and December, consensus, and averages of top 10 and bottom 10 forecasts of all regular variables for each of the next five years, plus an average for the following 5-year period.

Viewpoints: A sampling of views on the economy excerpted from recent reports issued by Blue Chip panel members

Special Questions: The results of special polls of the panel on questions of topical interest, i.e. monetary policy, fiscal policy, major influences on the outlook for growth, inflation, etc.

By enrolling a title in our Auto-Renewal Program, the title will stay up-to-date without interruption of service at the end of your subscription term, without any further action on your part, until you cancel. The renewal cost is the subscription price in effect at the time of renewal which will be invoiced, along with applicable sales tax and *shipping & handling charges. Subscription renewal prices are subject to increase in the future, however you are not required to renew any minimum number of times, and should you decide for any reason that you no longer wish a title to be enrolled in the Auto Renewal Program, or you did not intend to enroll, you may cancel at any time by calling Customer Service at 800-234-1660, emailing [email protected], or returning the invoice before it is due marked “CANCEL SUBSCRIPTION”. Enrolling a title in the program does not affect our standard cancellation policy.