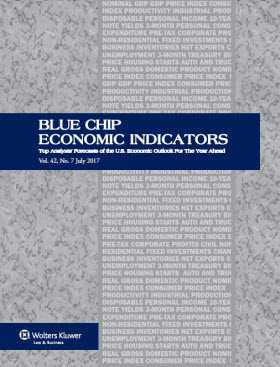 Each month since 1976, Blue Chip Economic Indicators has polled America's top business economists, collecting their forecasts of U.S. economic growth, inflation, interest rates, and a host of other critical indicators of future business activity. Our 30+ year track record of providing corporate and government decision-makers with our survey results has made Blue Chip Economic Indicators synonymous with the latest in expert opinion on the future performance of the American economy.

Each issue of this 16-page newsletter contains forecasts from 50-plus economists employed by some of America's largest and most respected manufacturers, banks, insurance companies, and brokerage firms.

Frequently cited by such national media outlets as Reuters, Wall Street Journal and Forbes, Blue Chip Economic Indicators provides forecasts for this year and next from each panel member, plus and average, or consensus, of their forecasts for each variable:

Each forecaster's prediction is published along with the average, or consensus forecast, for each variable. There are also averages of the 10 highest and 10 lowest forecasts for each variable; a median forecast to eliminate the effects of extreme forecasts on the consensus; the number of forecasts raised, lowered, or left unchanged from a month ago; and a diffusion index that indicates shifts in sentiment that sometimes occur prior to changes in the consensus forecast.

In addition to each month's survey results, you get:

By enrolling a title in our Auto-Renewal Program, the title will stay up-to-date without interruption of service at the end of your subscription term, without any further action on your part, until you cancel. The renewal cost is the subscription price in effect at the time of renewal which will be invoiced, along with applicable sales tax and *shipping & handling charges. Subscription renewal prices are subject to increase in the future, however you are not required to renew any minimum number of times, and should you decide for any reason that you no longer wish a title to be enrolled in the Auto Renewal Program, or you did not intend to enroll, you may cancel at any time by calling Customer Service at 800-234-1660, emailing [email protected], or returning the invoice before it is due marked “CANCEL SUBSCRIPTION”. Enrolling a title in the program does not affect our standard cancellation policy.