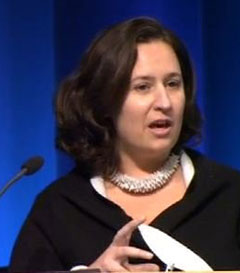 Rita de la Feria is Professor of Tax Law at the University of Leeds, and an International Research Fellow at the Oxford University Centre for Business Taxation. Her research focuses primarily on tax law and policy – particularly on the intersection between tax law and EU constitutional law, tax law and public economics, and tax law and criminology – having published widely on these areas, including four books, and over 60 journal articles and book chapters.

Professor de la Feria was listed two years running (2015-2016) in the Global Tax 50, by the International Tax Review, as one of the most influential tax people in the world; and was co-recipient of the 2016 Outstanding Women in Tax Award, awarded by the Tax Analysts. She features regularly in general media outlets discussing developments in taxation policy around the world, and worked with the BBC Panorama and the Guardian as an expert on the “Paradise Papers” leaks (2017).

VAT Exemptions: Consequences and Design Alternatives is the only in-depth evaluation of VAT that focuses on exemptions as a whole. Visit now to learn more!