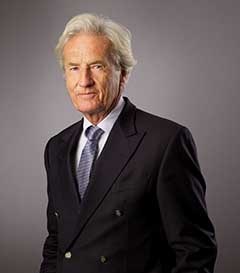 Peter Begg is a corporate lawyer with a very wide experience of industrial and commercial life, much of it of an international nature.  He is also the founder (and currently the editor-in-chief) of Corporate Acquisitions and Mergers.

Educated at Malvern College and Brasenose College Oxford, where he read Modern Languages, Mr. Begg went on to qualify as a solicitor at Clifford-Turner (now Clifford Chance) in 1974, before joining the Legal Department of the Rio-Tinto-Zinc Corporation in 1976.  He was assigned at an early stage to the uranium sales team and went on to work at Rio Tinto for 16 years in a variety of legal roles.  Subsequently he worked at Reed International PLC, Blenheim Group PLC and the Tarsus Group PLC, all highly acquisitive companies where he was heavily involved in M&A, joint ventures, reorganizations and other transactional work.

In 1985 Mr. Begg wrote a successful book entitled "Corporate Acquisitions and Mergers" which focused exclusively on English M&A law and practice.  Further editions (with a foreword by Lord Hanson) followed in 1986 and 1991. This has subsequently evolved over the last 25 years into a four-volume work (published online and in looseleaf form) covering M&A law and practice in over 60 jurisdictions, with contributions from many of the world’s leading law firms including Slaughter & May, Freshfields, White & Case, Clifford-Chance and Sidley Austin.

Mr. Begg has always been interested in M&A work because it demands such a broad knowledge of so many different facets of the law – company and commercial law, competition law, City Code and Stock Exchange regulation, accounting, tax, property (both real and intellectual) and employment law.  Continuous research and development of this text book over several editions has helped him to expand and consolidate his expertise.

Over the last 30 years Mr. Begg has also represented a variety of other clients including  the Savoy Group PLC, of which he was the Company Secretary, Euromoney Institutional Investor PLC, Thomas Pink Limited and Plantation and General PLC.  He was a director of Wentworth Golf Club for five years and was closely involved with the buy-out of the Queen’s Club by its members in 2005/2006.  He has been a trustee and remains a director of the Club.

Mr. Begg is married  and lives in London with his wife Tessa.  He has two children (Lucy born in 1979 and Harriet born in 1983) and has four grandchildren.

Corporate Acquisitions and Mergers is your one-stop multi-jurisdictional guide to the local practical issues involved in conducting transactions in a foreign country....This work tracks the key changes and developments in national laws and practice affecting mergers and acquisitions.