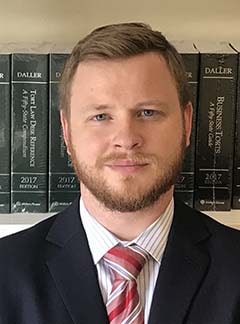 Mr. Daller, an associate at Swartz Campbell, focuses his practice on Toxic Tort Litigation and Product Liability issues. Before joining Swartz Campbell, Mr. Daller operated his own practice in Center City Philadelphia.  Mr. Daller has experience in successfully defending property and business owners in tax adjustment and foreclosure cases within Philadelphia and defending business owners in commercial vehicle code violation claims. Mr. Daller attended Syracuse University College of Law where he was granted the Law Success Scholarship upon admission and later was additionally granted the Brodsky Scholarship for excellence in Security Regulation. While in law school, Mr. Daller practiced as a student attorney with the Office of Clinical Legal Education in the Securities Arbitration and Consumer Law Clinic. Mr. Daller earned a BA in Anthropology from Franklin and Marshall College where he was able to participate in archeological digs in China and northern Pennsylvania. Mr. Daller is admitted to practice law in Pennsylvania and is a licensed notary within the State.

The Product Liability Desk Reference, 2021 Edition is a comprehensive resource that provides the most recent statutory and case law developments on product liability laws for each of the fifty states and the District of Columbia.

This guide helps you quickly assess the merits and pitfalls of litigation in any given jurisdiction allowing you to make the best decisions for your clients....Buy now!

Tort Law Desk Reference quickly gives you the information you need about the tort laws of each state. Buy now!