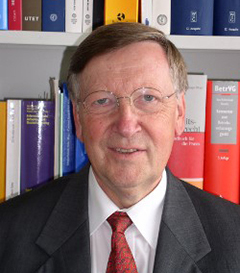 Professor Weiss is the co-editor of the International Labour Law Reports and of several journals. He is author, co-author and editor of books and articles in the fields of labour law, industrial relations, civil law and sociology of law.

He received honorary doctorates from universities in France, Peru, Hungary and South Africa. In 2015 He got the award for outstanding contribution to labour law.

The Future of Work: Labour Law and Labour Market Regulation in the Digital Era

It is a collection of expert essays that furnishes an abundance of well-thought-out material for comprehending the consequences of digitalization for the.

It provides a survey of the subject that is both usefully.

The Role of the State and Industrial Relations

The book's contributions provide important new perspectives on challenges in the present and future of the relationship between industrial relations and the state....Buy now!

Employment and Industrial Relations in Europe

Substantial progress has been made in the last 15 years in the areas of European economic, social and monetary integration, aided by social dialogue on employment and industrial relations at the international level....To be truly effective, the social