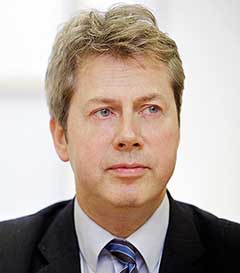 John Milligan is a solicitor qualified in England and Wales, also admitted in Ireland and formerly a barrister, and has since 2001 been an EU & competition partner at Clyde & Co LLP. He has over 20 years’ experience advising in the aviation, marine transport, energy and insurance sectors. He specializes in all aspects of competition law, including mergers and alliances, distribution and other commercial agreements, cartel investigations, damages actions, abuse of dominance, market investigations and the EU state aid rules.

Prior to joining Clyde & Co LLP, John was an associate at the Law Offices of SG Archibald in Brussels.  He studied law at Queen’s University Belfast and completed a Master’s degree (‘Licence spéciale en droit européen’) at the Université Libre de Bruxelles. John is a guest lecturer in EU competition law at the Institute of Air and Space Law at the University of Leiden, Netherlands.

European Union Competition Law in the Airline Industry provides an overview of competition law in the aviation sector. Read this book to know all the important details.